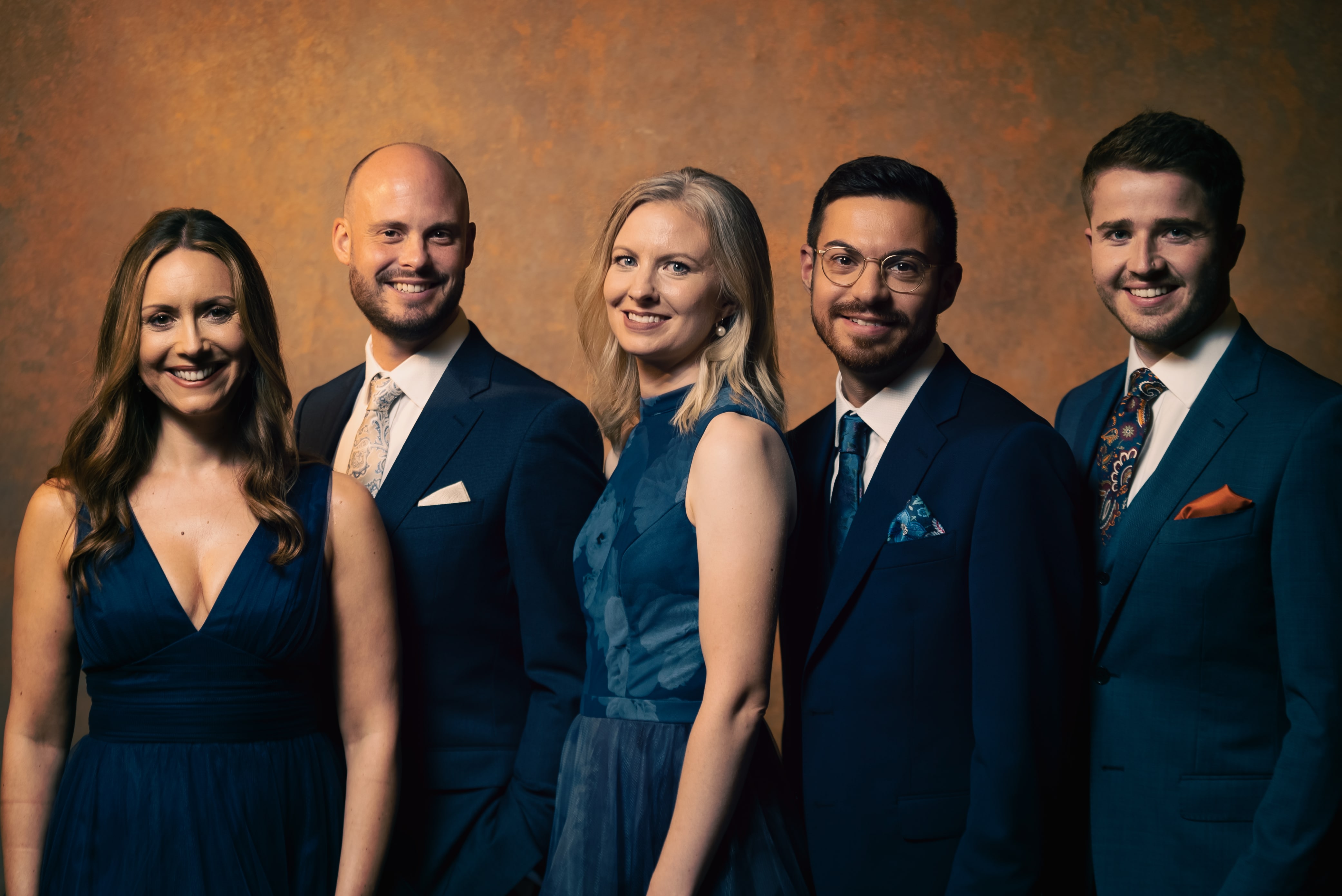 Critically acclaimed a cappella five-piece Apollo5 is one of Britain’s smallest but most formidable vocal groups. Comprising a soprano, mezzo-soprano, two tenors and a bass, the ensemble – which takes its name from the ancient Greek god of music – has become known for its rich, dynamic sound, demonstrating how powerful five voices alone can be. With a versatile approach to music programming, and a repertoire spanning renaissance, classical and contemporary choral works to folk, jazz and pop, the group’s five voices bring the music of five centuries to life.

During its 12-year career, Apollo5 has delivered an ambitious education programme and accumulated a busy touring schedule that has taken the group to many European countries, the USA and Asia. In addition to performing at prestigious UK venues such as the Barbican Centre, the Royal Albert Hall, Wembley Arena, St John’s Smith Square and St Martin-in-the-Fields, the group has toured extensively across Belgium, Germany and France. 2022/23 concert highlights include a major tour to the USA, appearances at French festivals such as La Folle Journée and Festival de la Vézère, and a debut at London’s Cadogan Hall.

The group is signed to Voces8 Records and has released a number of critically acclaimed albums under this label. Two recent studio albums, Where All Roses Go and O Radiant Dawn, charted in the top 5 of the UK Classical Charts, whilst collaborative studio album The Spirit Like A Dove (with the Ingenium Ensemble) and winter disc A Deep But Dazzling Darkness charted in the top 10 of the UK Classical Charts. Other albums include Renewal? and Reflections, both collaborations with Voces8 and with music by its co-founder Paul Smith, jazz and pop album With A Song In My Heart, and Journey, released on the Edition Peters Sounds label and featuring former King’s Singer Paul Phoenix. During the pandemic, Apollo5 were part of the launch of LIVE From London, a series of live broadcasts from many of the world’s leading vocal ensembles and orchestras. These online concerts brought music to the homes of millions during the pandemic, and raised funds for more than five hundred artists, composers and production teams in the process.

Their current 2022/23 season involves an exciting recording schedule, with two albums to be released in 2023. Invocations, which will be released in the spring, stems from Apollo5 and regular collaborator Fraser Wilson’s recent LIVE From London offering, and Haven, which endeavours to shed light on music written in exile and pairs William Byrd’s Mass for Five Voice with an engaging response from contemporary Ukrainian composer Anna Kuzina-Rozhdestvenskaya. Other season highlights include a major orchestral project with Voces8 and the Voces8 Foundation Choir, and new commissions from Donna McKevitt, Eric Whitacre, Michael McGlynn and Paul Smith.

As part of the Voces8 Foundation, Apollo5 works alongside Voces8 and Paul Smith to deliver a transformative programme of workshops, masterclasses and concerts to over 40,000 young people annually in the UK, Europe, the USA and Asia. Much of this education work is carried out at the Foundation’s home, the Voces8 Centre at St Anne & St Agnes Church in the heart of London. The group also oversees an extensive singing project in the London boroughs of Hackney and Tower Hamlets, working closely with inner-city schools and supporting their teachers. Now in its seventh year, this project is supported by Arts Council England, The Worshipful Company of Plaisterers’ Charity and the Goldsmiths’ Company Charity. The education programme is also supported by the City of London.